Two Strangers Living Together in Marriage

Adam Brown felt he was at the end of his rope. The money was gone; bill collectors were calling, and he was responsible to take care of his wife, Laura, and newborn daughter, Madeline. One more night of fighting with Laura only made matters worse, and it was too much for Adam to handle. 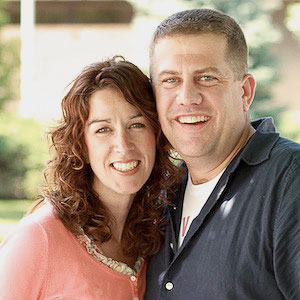 “Please don’t go,” Laura cried, standing at the door with their baby in her arms. “We can talk. We can make this work!”

“I don’t love you!” Adam replied. “I don’t want to be a part of this marriage! Just move out of the way and let me leave!”

But Laura would not move from the door. So Adam grabbed her by the shoulders and threw her into the kitchen far enough that he could leave.

Soon thoughts of fear began swirling in Laura’s mind: What’s wrong with me? What would I do with a new baby if he leaves me? Who am I without him? Bewildered with fear and consumed with pain, Laura put Madeline in the car and drove around looking for Adam and drawing on her faith as she sang to her daughter, “He who began a good work in Daddy, He will be faithful to complete it.”

Little did Laura know just how much that song would come to mean in the next few years. For the story of Adam and Laura Brown is a story of redemption and healing and restoration. It’s an example of what God can do when two people give their marriage to Him.

‘The best of everything’

Adam grew up in a religious home, but he had no desire to follow his family’s faith. His high school days were filled with parties, drunkenness, and rebellion. Laura grew up in a strong Christian home, but she wanted to branch out on her own and experiment with life.

After three years of dating during high school, Adam was ready to marry Laura. She said she wanted a Christian husband, so he says he “got saved” to appease her. “My thought was, Give me my checklist. What do I have to do?” Adam says.

Married life seemed good at the beginning; they both had well-paying jobs and were satisfied with their lifestyle. “Our goal in life was to get everything—the nicest cars, the best furniture, the best of everything,” Laura says. Soon they learned Laura was pregnant, so they started saving to buy a house and settle into their new life as parents …

… until Adam lost his job.

At first he was confident that he would quickly find a new job; he was young, and he had a lot of experience in his field. But after weeks of interviewing, nothing happened. “It started wearing on me,” Adam says. “I wondered what was wrong with me.”

In time, all the things Adam and Laura had enjoyed during their first year of marriage were gone. The bill collectors started calling, but there was no money to give. Adam was out of a job for a total of seven months, and during that time Laura was put on bed rest because of her pregnancy. For 21 weeks Adam and Laura were both unemployed.

“The first year of our marriage we did nothing but receive. That was what was important to us,” says Laura. “And the second year we had it all taken away from us.”

Their marriage relationship became strained. “We were two complete strangers on two separate couches in the same house,” Adam says. They became depressed, and Adam began blaming his condition on God. The only source of hope they had was the birth of their daughter Madeline.

Adam got a small job, but their financial pressures remained. He saw how much attention their new daughter was getting and thought, Why should Laura give me attention? I’m barely putting food on the table … What purpose am I serving?

The pressure was more than Adam could handle. He and Laura broke into an emotional argument, and that was the night that tipped the scales of their broken marriage. Adam threw Laura out of the way, took their truck, and ran off as Laura held their 4-week-old newborn in her arms, crying out to him.

Adam returned after a week, but four months later he brought Madeline to Laura’s workplace and announced again that he was leaving. Reconciliation followed, but the same cycle occurred three more times within the next year. Finally, Laura agreed to take Adam back only if they would go to their pastor for counseling.

Nine months of counseling helped give Adam hope for their marriage, but he still had no relationship with Christ. For Laura, it was an awakening. “I realized I did not trust this man and I did not love him. I cried myself to sleep at night, but I continually reminded myself that I had made a vow before God, and there was no way I could break that vow,” Laura says. “There was no joy in our marriage—I felt stuck.”

“There is no way our marriage can be changed …”

In 1997, one of Laura’s co-workers, Rita, told Laura about FamilyLife’s Weekend to Remember®, a three-day marriage getaway that Rita and her husband went to every year to refresh their marriage.

Broken and hurting, the Browns attended the getaway. “Some of your marriages will be changed this weekend,” one speaker told them on the first night. Laura was skeptical, thinking, “There is no way our marriage can be changed in one weekend.”

But those same words brought Adam hope. “He said that if we had an open heart and an open mind and were diligent to do the homework that our marriage could be changed,” Adam recalls. “I was ready to pay attention.”

The next morning, the gospel was presented, and for the first time Adam understood his need for Christ. “It was November 12, but for me it was like the Fourth of July,” Adam says. “Fireworks were going off in the back of my head—I was finally getting it!” That morning, Adam dedicated his life and his marriage to the leadership of Christ.

“We prayed together, and it was incredible,” Laura says. “The presence of the Lord was there, and we knew that God could change our marriage, making it new and filling the void that we felt. We realized that we were trying to do everything on our own, but we could never fix it. It had to be God, changing Adam’s heart and giving me hope again.”

That night they went to their favorite restaurant and talked for hours at a level of communication they had never before reached. “I’ll never forget looking across the table and feeling intense love for this man, where 24 hours before I did not love him at all,” Laura says. “Now I had a love that said I can forgive you for whatever we have been through. I knew that God was giving us hope and a fresh start. Even though the road may still be hard, God was with us, and it was going to be different than it had ever been before.”

As soon as the Browns returned home, they started applying to their lives the principles they learned in counseling and at the getaway. They began praying together every day, planning date nights, and communicating openly and honestly. They sometimes sent Madeline to spend time with her grandparents so they could stay home and enjoy each other’s company.

Together they learned how to build a relationship focused on God. “God had never been in our marriage before,” Laura says. “He may have been prayed to at mealtimes, but that was about it.” “He was like a piece of luggage on our roof rack,” says Adam. “And when we learned to trust Him, we gave Him the steering wheel and said, ‘Take us anywhere you want us to go.'”

After many months of accelerated growth—and a new baby named Malorie—the Browns began to see opportunities to minister to couples in their church, using their personal testimony as encouragement. Then their lives changed again when they were involved in a head-on collision with a drunk driver.

Laura and Madeline, bruised and bleeding, were hooked up to IVs, and Laura was put in a neck brace. “I started sobbing as I watched them, thinking that I could have lost my family,” Adam says. “From the house, the cars, the things I wanted so bad—they could be empty, and my family would still be the most important thing to me.”

Stripping away the desire for material things

From that point on, it was Adam’s goal to concentrate on his family. “God used that wreck to strip the desire of material things from our minds and our hearts, which really opened us up to ministry even more,” Laura says.

In December 2000, Adam and Laura lay in bed together and committed their lives to God’s service. They said, “God, we don’t know where you’re going to call us, or where you’re going to use us. If you want us to go to Africa, we’ll go to Africa, but show us where to go and we’ll be there.” Eventually they answered God’s call to serve at FamilyLife, and worked at the headquarters in Little Rock for several years. The Browns now have their own discipleship ministry.

“Looking back, we can see God’s fingerprints all over our lives, shaping and molding us for this time,” Laura says. She remembers that night, looking for Adam and singing to Madeline, never knowing what God would do to complete this work in Adam.

“We’re still in the process of being completed by Him, but we have seen His faithfulness in the miracles He’s already done in our lives … God’s got a plan in all of it, and we just want to be open to be used by him.”